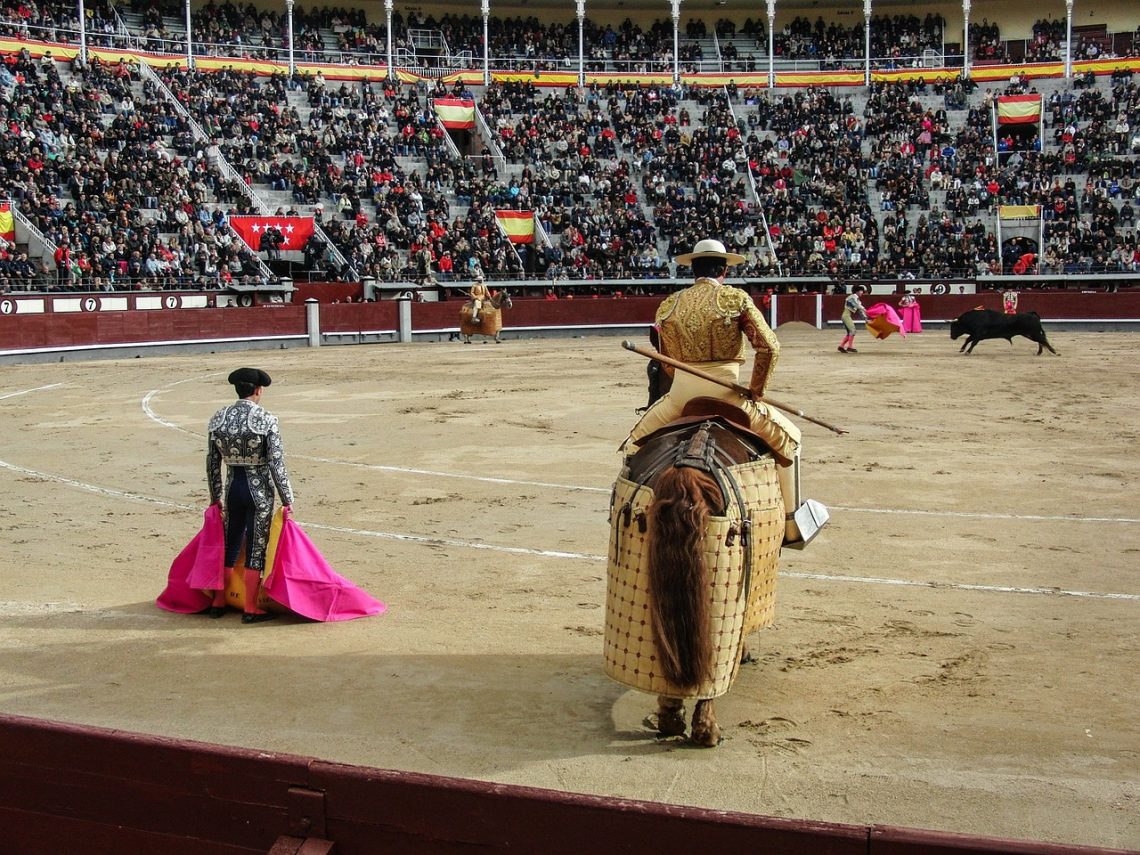 The Spanish bullfight traditionally features three senior bullfighters who kill two bulls each, for six fights total in a spectacle that lasts around two and a half hours. Unless a junior bullfighter is being promoted to the status of matador de toros, the order of fights begins with the most experienced matador and ends with the newest one, and then repeats.

Each bullfight is divided into three acts or tercios (literally, “thirds”), and is completed in about 20 minutes. Each of these acts is described in detail in its own section below. But first, we should familiarize ourselves with who’s who in the ring.

A bullfight includes three different types of toreros: matador de toros, picador, and banderillero. The star of the show, so to speak, is the matador. His support crew or cuadrilla consists of two picadors on horseback and three banderilleros on foot. Before the fight begins, all of the toreros parade into the ring in three lines, headed by the three matadors, followed by their respective banderilleros, with the mounted picadors bringing up the rear.

The Presidente does not set foot in the ring, but he is a critical element of the Spanish bullfight. He is the primary judge of the fight, with the power to require a defective bull be replaced, award trophies, or even grant a pardon to the bull. The Presidente also gives the command for trumpets to sound, announcing the beginning of each portion of the fight.

There are also auxiliary personnel who play a less visible or glamorous role, but a very important one. This includes the monosabios who assist the banderilleros with their horses, veterinarians, advisors to the president, and arena workers who smooth the sand in the ring out between each fight.

In the first act, the Tercio de Varas, the matador uses the large yellow and fuchsia cape, the capote, to test out the bull and gauge his behavior. Meanwhile, the picadors provoke the bull to charge at them on their horses (which wear a protective cover). When the bull is close enough, they stick their lances (picas) into the bull’s shoulder muscle. This begins the process of weakening the bull and forces the bull to lower its head slightly, which will be important for the matador later on in the fight.

Act two is the Tercio de Banderillas, or “little flags”. In this act, the three banderilleros work on foot to stick colorful barbed sticks, two each, into the bull’s shoulder muscles. This further weakens the bull and, again, forces it to carry its head lower. Spectators, the Presidente and the matador also make judgments as to the bravery of the bull—a bull that is unwilling to charge results in a disappointing performance. Finally, this is the last chance for the matador to understand the bull’s tendencies before facing him one-on-one in the third act.

The Tercio de Muerte, “death”, is the most famous portion of the bullfight, where the matador exchanges his capote for a smaller red cape, the muleta, and faces the bull alone. This act is supposed to last no longer than 10 minutes from the moment the trumpets sound to the moment the bull falls to the ground, but it is where the matador will showcase most of his artistry and skill.

The muleta is given structure by way of an incorporated rod or stick (muleta literally means “crutch”) and, when held in the matador’s right hand, by the imitation sword he carries in this act. He will make a series of passes, inciting the bull to charge with the muleta so that the animal passes very close to his body. This is a show of technical skill, artistry, courage and dominance over the bull, and, when done well, should build beautifully as in a symphony. All of the performance done with the muleta is known as the faena.

After four or five such passes, when the matador feels that the bull is ready, he trades his imitation sword for a real steel blade. Now, he stands directly in front of the bull, and draws its attention to the muleta so that it lowers its head. As the bull charges, the matador steps towards the bull and raises his sword, thrusting it down into the back of the bull’s neck as they come together, called the estocada. If done correctly, this severs the bull’s aorta, leading to almost instant death. When the bull falls to the ground, another torero comes with a dagger to ensure the animal is killed swiftly.

Both the crowd and the Presidente judge the performance of the matador and of the bull. Spectators will wave handkerchiefs to request that the matador be awarded a trophy, which is an ear cut from the slaughtered bull. In very rare cases, they can also request a pardon or indulto for an exceptionally brave bull. Majority determines whether the matador receives the first ear, and it is at the Presidente’s discretion to award up to two more trophies: the other ear and the tail.