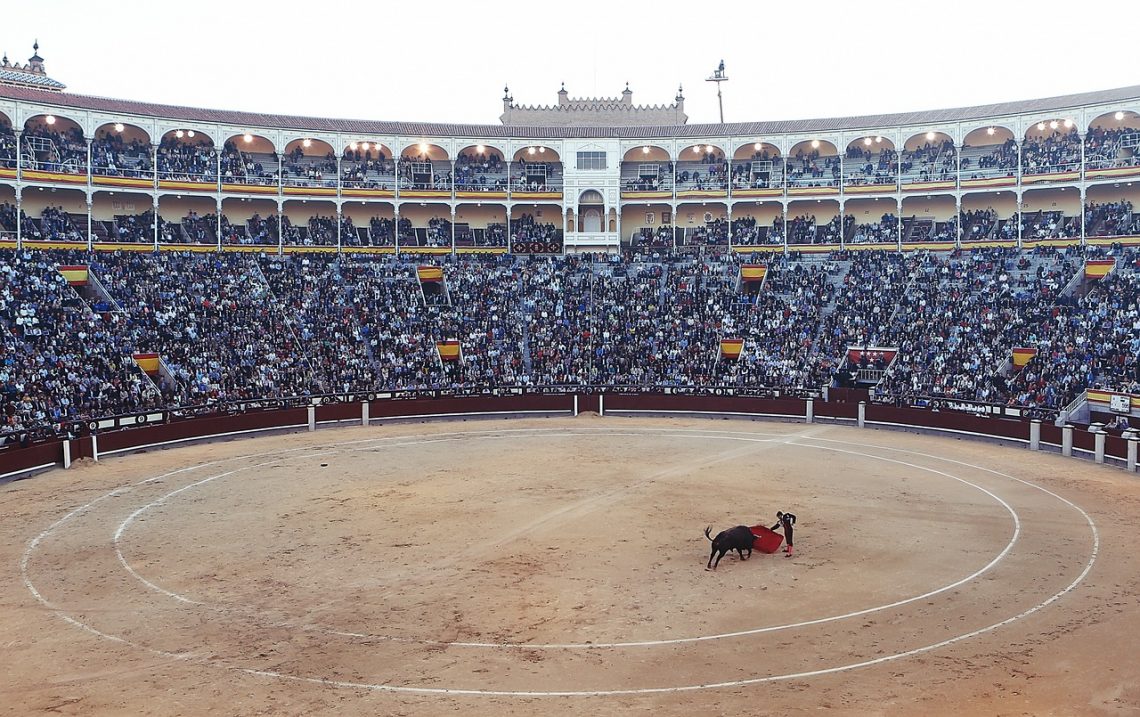 Where is bullfighting still legal?

Bullfighting is still legal and practiced today in Spain, France, Portugal, Mexico, Colombia, Venezuela, Peru, Ecuador. In some cases, the type of bullfighting is not exactly the same as the traditional corrida which ends with the slaying of the bull (in Portugal, for example, fights are now only done on horseback, and the bull is not killed).

The sport has been completely banned in Argentina, Canada, Cuba, Denmark, Italy, and the United Kingdom. There are some countries which fall in a gray area, such as the United States, where modifications have been made to Spanish-style bullfighting to avoid injuring the bull.

Is bullfighting still legal in Madrid?

Yes, bullfighting is still legal in Madrid and, since 2016, throughout the entire country of Spain. Other regions and cities have attempted to impose local bans on bullfighting, but these bans were overturned by the national government.

Bullfighting continues to draw large crowds in Madrid at its main bullring, Las Ventas, short for La Plaza de Toros de Las Ventas del Espíritu Santo. Bullfighting season runs from March to October, but the best time to see one in person is May through June during the festival of San Isidro. During this time, there are daily fights over the course of 20 days, including young bullfighters fighting novillos, rejoneadores fighting on horseback, and traditional fights with the matador that is so firmly ingrained in the collective imagination. Outside of San Isidro, bullfights in Madrid are usually held on Sunday evenings.

Is bullfighting still legal in Mexico?

Yes. In fact, Mexico is home to the world’s largest bullring, Plaza México in Mexico City, with a capacity of 48,000 people. The sport’s legal status does not apply nationwide, however. It has been banned in three states: Sonora, Guerrero, and Coahuila. Bullfighting is still legal in Puerto Vallarta Mexico, as it is located in the state of Jalisco.

However, this wasn’t always the case. Bullfighting was banned in Mexico in 1890, which spurred bullfighters to move north of the border and likely had a strong influence in American rodeos.

How is American bullfighting still legal?

The legal status of bullfighting varies from country to country in North and South America. In the United States, the sport is not banned outright, but only a so-called bloodless form of bullfighting is allowed. This version has become most popular in Texas and California, and unlike a traditional Spanish corrida, it does not end with killing the bull.

Two main versions of North American bullfighting exist. The first is called freestyle, which is a type of bullfighting that was developed by rodeo clowns as they worked to protect bull riders. In this kind of fight, the bull is not provoked; instead, the fighter/clown uses a barrel to dodge a charging bull. This is a formally recognized sport organized by the WBC and the Dickies National Bullfighting Championship.

The second type of American bullfighting is native to California, where it was born in the heart of the Portuguese immigrant community. California instituted a ban on bullfighting in 1957, but later amended the law to permit a form of bloodless bullfighting under pressure from the Portuguese-American community. This type of bloodless bullfighting looks more like a traditional corrida, but the animal is not actually injured. The bull is not killed, and instead of being stuck with lances, it has velcro patches on its shoulders, and the bullfighter throws velcro-tipped lances at those patches. Despite causing no injury to the bull, this practice does involve intentionally irritating and provoking the animal, and there are many people in California (and elsewhere) who feel that this form of the sport should also be banned.

Is bullfighting still legal because of traditions?

Essentially, yes, bullfighting is still legal because it is considered a tradition and an essential element of Spanish culture. In 2016, when Spain’s constitutional court overturned the ban on bullfighting in Catalunya, they described the sport as “one more expression of a cultural nature that forms part of the common cultural heritage.” The more cynical opponents will argue that continuing the practice is more about financial benefit than a deeply held respect for cultural tradition, however.

How is bullfighting still legal?

Many people concerned about animal welfare are wondering how bullfighting is still legal in advanced countries like Spain and France. As explained in the previous point, there are very vocal supporters of bullfighting who defend its centuries- or even millennia-long tradition. Organizations such as PETA and Humane Society International want to put an end to bullfighting in all forms, but in Spain at least, the sport has some very powerful advocates. This was made extremely clear when the conservative Partido Popular majority party moved that it was against the Spanish constitution for cities to create their own bans on bullfighting.