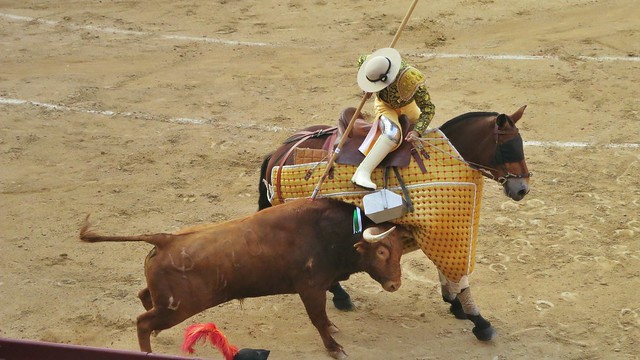 Merlin is a Bullfighting Lusitano stallion bred by former Rejoneador Jacques Bonnier. This fantastic horse was initially trained by Rafi Dumond, but currently owned and train by Pablo Hermoso de Mendoza. Merlin became really famous after biting a bull in a show to protect the matador. It was considered an “over the duty” circumstance that exceeds the traditional expectations of this trained horses.

Pablo Hermoso de Mendoza and Merlin had become a fantastic team providing a unique show. This Rejoneador considered the best bullfighters on horseback of all times, began his career competing on professional Equitation. On a family getaway and after witnessing a show by João Moura and Álvaro Domecq son in Logroño, he decided to reconduct his professional career and start training to become a Rejoneador. He formally was accepted into the community in August 1989.

What breed is Merlin the bullfighting horse?

Merlin is a Bullfighting Pure Blood Lusitano stallion. This breed is possibly the oldest saddle horse in the world. The origins are in Portugal, but the strain is closely related to the Spanish Andalusian horse. Lusitanos have thick-neck, stiff muscles, gray, bay or chestnut hair and impressively tall bodies (62 and 63 inches, 157 and 160 cm). They are very brave and been used in combat in ancient times.

Where is Merlin the Azteca bullfighting horse?

Merlin is not an Azteca horse. This breed is very nervous making them unsuitable for Rejoneo. Merlin nowadays belongs to Rejoneador Pablo Hermoso de Mendoza.

Who rides merlin the bullfighting horse?

Merlin was bred by former Rejoneador Jacques Bonnier but is ride by Pablo Hermoso de Mendoza, known as the best Spanish bullfighter on horseback.

Did Merlin, the bullfighting horse, died?

No. Merlin is still alive and acting.

‘Rejoneo,’ as is called in Spain, or ‘The Portuguese Form’ is also practiced also in Mexico, France, and Colombia. Rejoneo is a very spectacular adding the difficulty of riding stand still while managing the bull and its constant attacks. The style implicates the horse and the rider dispatching the bull rather than merely weakening it but acting as a Matador classically.

What the difference between a Rejoneador and a Matador?

Rejoneo’s horses wear a special gear that protects them from the horns. The bullfighters, called Rejoneadores, also wear different clothes: Spaniards and Americans wear Andalusian short-bodied suits, Mexicans dress in the Charra fashion, and Portuguese wear an outfit named “A la Federica,” recalling the attire of the 18th century.