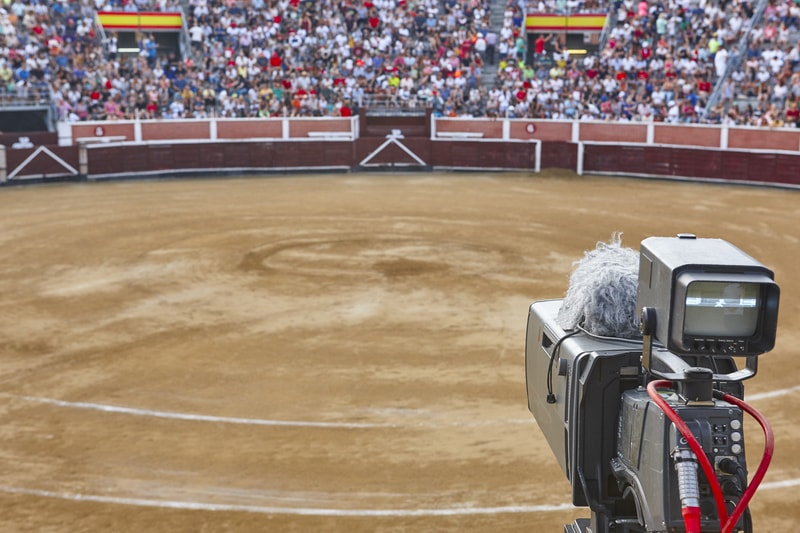 To do an article on the ten most important bullrings in the world, let alone just Spain itself,   would be subjective grading at best. Beauty is in the eye of the beholder and personal opinion would run  high. There are some bullrings people would unanimously agree upon due to size, quality of bullfights, quantity of bullfights and history. While the list might be arguable, this is a profile on what may or may not be the world’s top bullrings, noting the majority seem to be found in Spain.

Historically, Madrid’s huge Las Ventas bullring is an architectural beauty  of pink brick that has been around for decades. Virtually every top matador in modern  times has appeared here and the annual San Isidro  Fair  held in May with a month of bullfights in a row is considered the most important festival in all  the  world by the experts. Technically, the bullfight season lasts from March until the end of September in this arena, but even when the bullring is not hosting bullfights, there is a fine museum to be seen that is open year round.

2. The Maestranza in Sevilla, Spain

Located far south of Madrid, but easily reached by varied mode of  transportation this bullring is considered by most to be the second most important in Spain and perhaps the world. While Madrid’s   key bullfighting festival is in May, Sevilla’s in April has many top matadores, several days of bullfights and other festivities. There is also an excellent museum devoted to bullfighting on the grounds, like with Madrid..

The port city of Valencia also has a large bullring that continually offers important bullfights. There is a museum which included the suits worn by the Aparici brothers and by Manuel Granero on the days they received  fatal gorings.

It has always riled the Spaniards a little to know while they may have the most important or prestigious bullrings in the world, at least in their eyes, the largest bullring anywhere is in Mexico City with 50.000 seats. They hold bullfights around the year, with novice events in  summer and full corridas with top matadores in  winter. When the official Spanish season closes from October to March, most top Spanish toreros come here. Manolete, Cordobes, Enrique Ponce, Linares, Jose Tomas, Juan Jose Padilla and Diego  Puerta remain some of the top Spanish stars who walked across the sand here. Curiously, with Mexican bulls being smaller and faster than those found in Spain has led many Spaniards to have easy triumphs in Mexico, where visiting Mexicans such as Manolo Martinez and   Silverio Perez, regarded as phenomenons in their own land, failed miserably in Las Ventas when coming to Madrid.

Some purists shrug off this bullring as unimportant due to it being found on the Mexican/American border, where many attendees are tourists and not true fans. The size of the ring alone would make it worth rating, with its 27,000 seats,  though reportedly the only man to ever sell out the stadium was a Spaniard, Antonio Ordoñez. Running irregularly from April into September, fans are often treated with top names from Iberia  and   South America, as well as Mexican toreros.  Recently, Julio “Cordobes” the son and grandson of the famed “Cordobes” dynasty from Spain, made an appearance here.

In Portugal, the bulls are not killed in the ring and most of the bullfighting is done in the style of rejoneo or facing the animals off of horseback rather than foot. Another work of architectural beauty and historical significance, this arena offers an odd alternative to standard bullfighting, as does Portugal itself with its smaller rings in Elvas, Cascais and the like.  Portugal has  produced many fine matadores itself, including Tito Semedo, Antonio Prates, the Telles  family, the Moura family, Zoio, Rui  Santos, Duarte and Jorge Pereira on horse, plus  Manolo Dos Santos, José Julio, Vitor Mendes. Fernando Dos    Santos, Antonio Portugal and Pedrito De  Portugal on foot, to just name a few.

A respected bullring in ne of Spain’s most traditionalized of cities, which has  been producing top  toreros for decades. Manolete and El Cordobes ad some of their greatest triumphs here while the former, killed in Linares in 1957, rests within a local cemetery with his monument being as big a tourist attraction as the arena itself.  There is also an outstanding bullfighting museum in Cordoba, with artifacts related to the history of the ring and those who were born in the province.

As with Plaza Mexico, many Spanish toreros come to Lima every year when the Spanish season shuts down. Manolete packed the place a short time before his fatal goring back in Spain. El Juli, El Fandi and other contemporary Spanish stars are big favorites here. Among the Peruvians, Fernando Roca Rey is their biggest star at the moment.  Their big season tends to run from October through March.

Easily reached from Madrid, by road, rail or air, one of the last major fairs of the year takes place in Zaragoza every October. The city has produced some noteworthy toreros in his  own right over the decades, including Florentino Ballesteros, who was looking to become a top star, but died from a  goring in the lung in Madrid before he could truly establish himself.  A fan  club in his honor and that of his rival, Herrerin,  who was also killed by a bull, meets to this day,  decades after the fact, in downtown bars.

Known as the birthplace of the Ordonez and Romero families, both great dynasties within bullfighting, there is a museum noting the historical importance of this Spanish town.  Their ancient bullring ahs survived the centuries and the ravages of time. An annual.