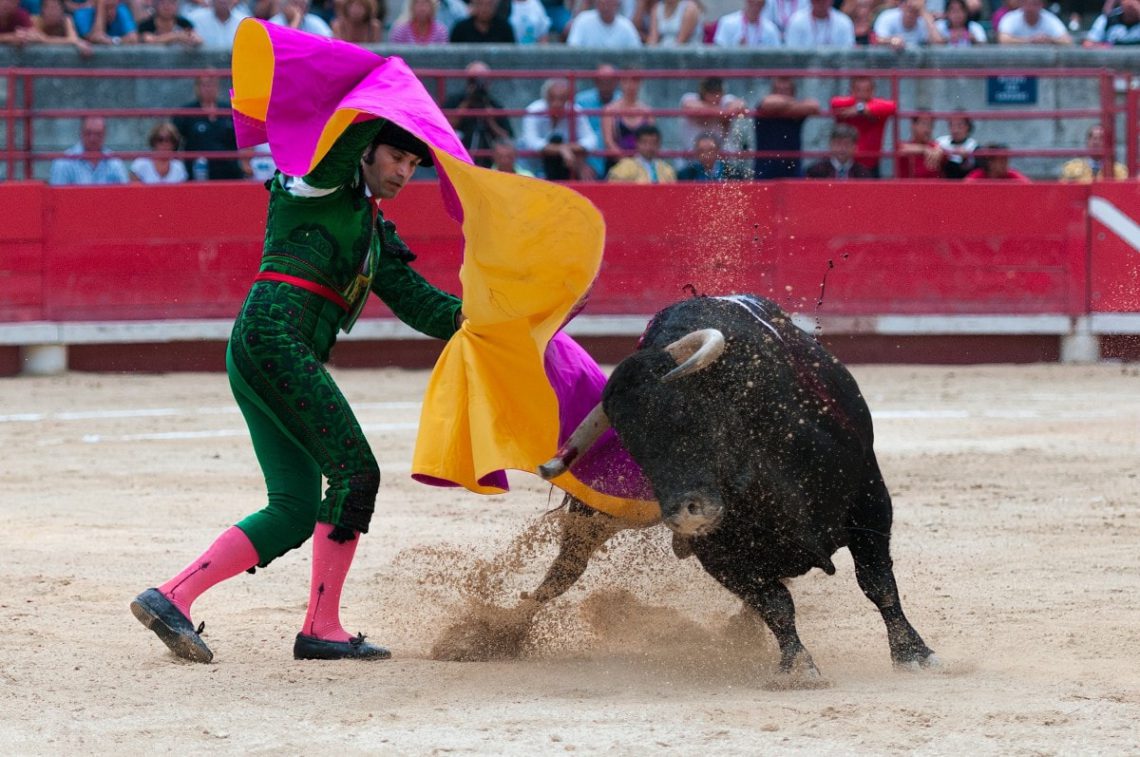 Although many people do not realize it, bullfighting is an extremely complex sport (or artform, if you like), with an accompanying vocabulary that can seem equally complex, especially for non-Spanish speakers. In this article, we answer some of the most common questions relating to what to call a bullfighter.

What is a bullfighter called in Spanish?

English speakers might be most familiar with terms such as matador, torero or toreador for what a bullfighter is called in Spanish. However, there are several words in Spanish that can be used to refer to a bullfighter. It all comes down to their professional status and the specific type of bullfighting they practice (cartoon depictions notwithstanding, there is more to it than one guy waving a cape around). Keep reading for all the details below!

What is a bullfighter called in Spain?

In Spain, where fights on foot still take place (unlike in Portugal, where it is only done on horseback), bullfighters may be called a number of things depending on their role in the corrida and their place in the hierarchy of the world of tauromaquia. Matador, matador de toros, torero, picador, rejoneador, banderillo, subalterno, and novillero are all words that can be used to describe a bullfighter, although they are certainly not interchangeable.

When in doubt, you can use the word torero, as it is a general term that is appropriate for anyone who participates in this sport in Spain (as well as Portugal, France and Latin American countries where it is practiced).

What is a principal bullfighter called?

The principal bullfighter is the star of the show, so to speak. He or she is the leader of the other fighters in the cuadrilla, or entourage, who work together with designated roles to take down the bull. This principal bullfighter is called matador, or more properly matador de toros (killer of bulls). In the ring, the other toreros may address the matador as maestro (the others in the entourage can be collectively called subalternos, although they also have their own titles specific to their role in the fight). The distinction of matador de toros is an important one, as it separates full-fledged bullfighters from young ones who are still training. You can spot the principal bullfighter in the ring by looking for the gold embroidery on his costume.

What is a young bullfighter called?

In order to be formally recognized as a matador de toros, bullfighters must pass a test known as the alternativa. Essentially, it is their first fight/performance in which they kill a mature bull. Before taking their alternativa, young bullfighters are called novilleros. This is because they train by fighting young bulls known as novillos. At the end of their alternativa, their mentor will present them to the audience for the first time as matador de toros.

What is a bullfighter on foot called?

A bullfighter on foot can be called a matador or matador de toros if they have taken their alternativa. Otherwise, they are considered a novillero. They also fall under the general term of torero. In English, it is common to use the word toreador as a catch-all for bullfighters, but this is not technically correct. In Spain, toreador specifically refers to bullfighting on horseback, although it has become a bit antiquated and is hardly used in Spanish anymore.

Another type of bullfighter on foot, one of the subalternos in the matador’s entourage, is the banderillero. They are named for the banderillas or little flags with barbed ends that they stick into the bull’s shoulder during the second stage of a traditional three-part bullfight.

What is a bullfighter on horseback called?

As we mentioned in the previous point, the word toreador in Spanish is used for bullfighters on horseback. However, this term is rarely used nowadays and has been replaced with rejoneador.

In the context of a traditional bullfight with a matador and his cuadrilla, another type of bullfighter on horseback is the picador. They are named for the lance or pica that they use to stab the bull during the first stage of the fight, known as the tercio de varas.

What is a female bullfighter called?

In Spanish, masculine nouns can be converted to feminine nouns by adding an -a to the end of the word, or by replacing a final -o with an -a. Following this convention, a female bullfighter is called the same thing as her male counterpart, depending on her status and role, but with an -a on the end. For example, torero becomes torera, and matador becomes matadora.

However, there are some social factors that need to be considered here. Because many female bullfighters have been treated with hostility by some fans of the sport and even by other bullfighters, some of them prefer not to “other” themselves by using the feminine form of these words. When in doubt, the safest bet may be to simply call female bullfighters the same thing you would call a male bullfighter: torero, matador, rejoneador, and so on, depending on her situation.

What is a Spanish bullfighter called?

Any Spanish bullfighter can be called a torero. More specific terms also exist for the different types of bullfighters who practice in Spain. For example, matador for the primary bullfighter on foot, rejoneador for a bullfighter on horseback, or novillero for a young bullfighter who has not yet killed a mature bull.

What does matador mean in Spanish?

In Spanish, matador is short for matador de toros. This is the primary bullfighter, recognizable by the flashy gold embroidery on his costume, and the one who ultimately kills the bull. Matador comes from the Spanish verb matar, which means to kill. Matador de toros, then, translates to “killer of bulls”.

What does matador mean in English?

In common parlance, the word Spanish loanword matador is used in English to mean a bullfighter. It literally translates as killer, because the matador ends the fight by slaying the bull.

What is the difference between a matador and a bullfighter?

Also, a typical Spanish bullfight is divided into three parts, with three different types of bullfighters. Only the bullfighter in the final stage, the one who kills the bull, is considered a matador. In short, all matadors are bullfighters, but not all bullfighters are matadors.

What is the difference between a matador and a toreador?

Going by the strict Spanish definitions, there is a big difference between a matador and a toreador, which is that toreador describes a bullfighter on horseback. However, the term toreador has been almost completely replaced by rejoneador, and is now commonly used in English as a word referring to any type of bullfighter. In this sense, among English speakers there is really no difference between matador and toreador; the distinction is technical and generally only important to people who take a great interest in bullfighting.

What is a torero? What does torero mean?

Torero is a Spanish word that more or less serves as an umbrella term for all people who practice the sport of bullfighting, regardless of their specific function in the arena. Basically, then, a torero is a bullfighter. This is logical considering the literal meaning of the word, from the Spanish for bull, toro, with the suffix “-ero” that indicates a person who does something.

How to pronounce torero

Unlike English, Spanish only has 5 vowel sounds, which roughly sound like the following: a (ah), e (ay), i (ee), o (oh), u (oo). Following these rudimentary pronunciation rules, this is how you pronounce torero: toh-ray-roh (or, using English words that sound similar: tore-air-oh). It kind of rhymes with tornado!

Bonus points if you can soften the initial t sound by placing the tip of your tongue against your hard palate just behind your teeth and give a very slight roll to the two r’s in the middle.

What is it called when a bullfighter goes between the horns?

This question could refer to a few different situations in a bullfight. The first is the act of the bullfighter going between the horns, in a sense, as he sweeps the cape over the bull’s head, a pass known as a verónica. It could also be asking about the moment in which the matador kills the bull with his sword, known as the estocada. The matador drives his sword through the back of the bull’s neck and into its heart, which is supposed to result in a quick, clean death.

Finally, another time when the bullfighter might “go between the horns” is if he is gored by the bull, which in Spanish is called a cornada, from the word for horns, cuernos.

The most famous torero of Spain: what special thing did he do?

Ask any Spaniard or bullfighting aficionado anywhere in the world who Spain’s most famous torero is or was, and you’re bound to get many and diverse responses. That being said, a fair portion of those answers would likely include the name Manolete, born Manuel Laureano Rodríguez Sánchez. He rose to fame in the post-Spanish Civil War era, beginning his career at age 17. He died in the bullring at the age of 30, just after he had announced his plans to retire from bullfighting. This Spanish torero is widely considered one of the best in the country’s history, and he was famous at the time for his sober and austere technique.

Apart from his unique ability to stand very still as the bull passed very close by his body, he would also remain in one spot and link together several consecutive passes into an elegant and exciting series. One type of pass with the muleta cape came to bear his name: the manoletina pass. This pass is usually made just before the estocada, when the matador drives his sword through the bull’s neck for the kill.