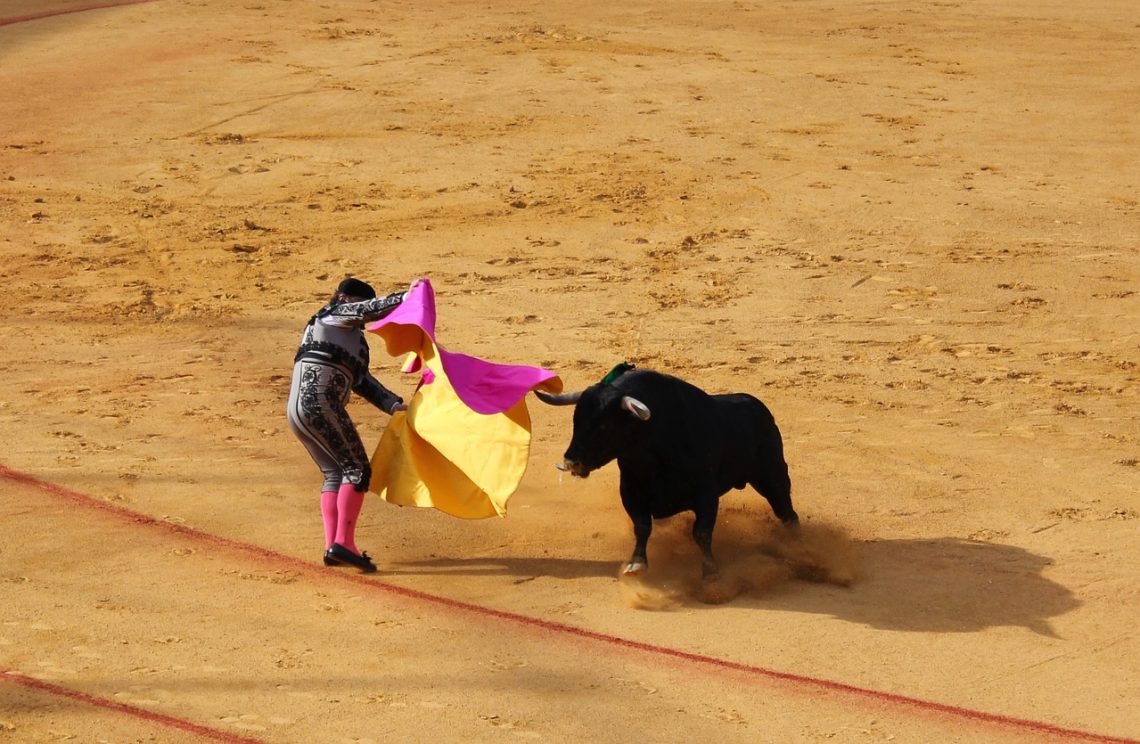 By far the predominant argument on the anti-bullfighting side of the controversy centers on animal cruelty. Spanish style bullfighting does, after all, culminate in the killing of the bull. Opponents view the sport as antiquated and unnecessarily cruel to the bulls. While supporters argue that the way the bull is killed at the end of the bullfight is very efficient, and thus humane, it is true that the spectacle begins with weakening the bull by driving spears into its back and shoulders. Only at the very end of the fight does the matador pierce the animal’s heart with a sword, ending its life. With this in mind, it is difficult to argue that the bull does not suffer during this entire confrontation.

But what about the rest of the bull’s life before it enters the bull ring? On another note, is it hypocritical to decry bullfighting on ground of animal cruelty without also denouncing the less humane practices involved in the meat industry? Is it reasonable to argue that killing an animal in broad daylight for entertainment (and later, human consumption) is unacceptable, but killing that same animal behind closed doors to be butchered, packaged and turned into a hamburger is perfectly fine?

These are some of the main counterpoints raised by bullfighting supporters. The latter two arguments really come down to an individual’s moral principles, and could be debated until the end of days. As for the first point, there is something important to consider: if you exclude its final day in the bull ring, a toro bravo has a quality of life that is worlds away from that of beef cattle. First of all, the bulls are not led into the arena to fight until they are four to six years old, whereas beef cattle are usually slaughtered before the age of two. The bulls’ strength and fighting ability depends on the conditions in which they are raised, which means they live their lives in wide open pastures, free to roam and graze. There is simply no comparing it with the cramped, stressful living quarters of beef cattle, who are overfed a very limited diet.

After the matador kills the bull in the arena, the animal’s meat is highly coveted, and, depending on who you ask, “no part of the animal goes to waste”. Is all of this enough to justify bullfighting, though?

Apart from their counterarguments regarding animal cruelty, the other point commonly raised by enthusiasts is that the Spanish bullfight is traditional, dating back many centuries, and integral to Spanish culture. And, despite the opposition, supporters eventually got the validation they sought. In 2013, the right-wing Partido Popular supported a petition in 2013 regarding the legal status of bullfighting in Spain. With nearly 600,000 signatures, the petition ultimately led to the sport being declared a part of the country’s “Patrimonio Cultural”, or cultural heritage. The effects of this legislation are far-reaching and will give tax benefits to bullfight organizers and has already overturned the local ban put in place in Catalonia, which the Spanish Supreme Court declared unconstitutional in 2016.

Anti-bullfighting sentiment is almost as old as the sport itself, and it has been banned or denounced in various (mostly ineffectual) ways over the centuries, starting with the Romans. The Catholic Church even went so far as to ban the practice in the 16th century for being too pagan and too dangerous, a ban which remains in place to this day in the sense that bullfighters are excommunicated from the church.

More recently, in 2010, the Spanish autonomous community of Catalonia banned bullfighting. This ban did not apply to “running of the bulls” events, similar to the annual festival of San Fermin in Pamplona. The ban was ruled to be unconstitutional in 2016, but that hasn’t stopped other parts of the country from trying to institute their own bans. That same year, the Balearic Islands tried to ban it, but the courts decided it was unconstitutional for a local government to institute an outright ban, although one does still exist in the Canary Islands, the legal status of which is unclear. To work around this, the Balearic government is working to implement very strict laws to regulate how the bullfighting is done.

Polls on the popularity of bullfighting in Spain show varied results, but as in most cases, the majority of Spaniards seem to fall in the middle of two extremes: they don’t necessarily support bullfighting, but they don’t think it ought to be banned, either. Depending on the poll, the sport might be becoming more popular, although one survey for Humane Society International reported that 75% of Spanish citizens have not attended a bullfight in the last five years. Other polls report 37% considering themselves fans, and 57% being opposed to a ban on the sport.

Bullfighting has been controversial for centuries, and for the foreseeable future, it will continue to be a subject of debate.